Ambulances of the Future

Kenyan Ambulance Made of Bamboo

Top 100 Gadgets Trends in March
Next
Set of
Related
Ideas 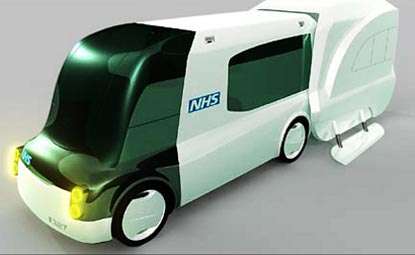 The Shell concept is “a removable ‘shell’ that can slide off the main vehicle to create an expanded treatment space, or left on the scene for extended periods of time,” according to the BBC.

Other ideas include James Bond like seats which eject and launch equipped paramedics on the spot without wasting time, and the Blue-Sky project, which enables the vehicles to drive as fast off-road as on road.

These futuristic concepts are part of a two year project called Healthcare on the Move: The Smart Pods Project and includes six models thus far.

The core idea is to provide a vehicle equipped with technology and manpower to bring the emergency room to the patient rather than the traditional ambulance carrying the patient to the hospital. It would require paramedics to be trained to handle and diagnose patients on the spot.
5.8
Score
Popularity
Activity
Freshness