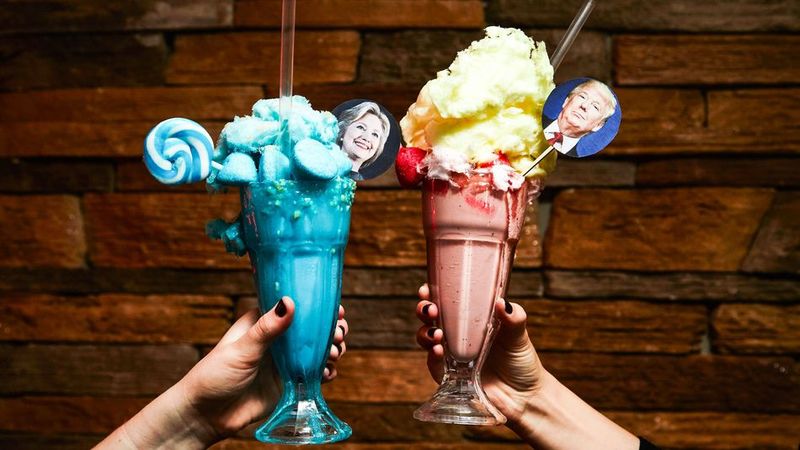 The Diner's New 'Freakshakes' are Inspired by the 2016 Election

Joey Haar — October 17, 2016 — Pop Culture
References: goodlifediner & mashable
Share on Facebook Share on Twitter Share on LinkedIn Share on Pinterest
The Diner, an Americana restaurant in central London, specializes in a dessert dish it calls 'freakshakes,' which are milkshakes with wickedly decadent flavors and baked goods and candy as toppings. In honor of the 2016 US presidential election, The Diner has introduced two new freakshakes based on the likenesses of the leading candidates: Donald Trump and Hillary Clinton.

The two freakshakes are each colored in their respective presidential candidates party colors, with the Hillary shake being blue bubblegum and the Trump shake a red strawberry gelato. The Hillary freakshake is relatively gentle with the presidential candidate, with the only overt reference to Clinton being the color of the shake. However, the Trump shake comes with a garish handful of yellow cotton candy on top, a clear reference to Trump's notorious hair style.
2.9
Score
Popularity
Activity
Freshness
Attend Future Festival Virtual