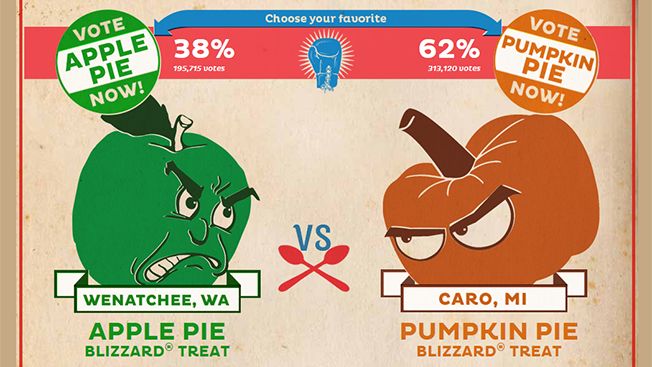 Dairy Queen's Food Battle Has Apples, Pumpkins & US States Duke It Out

Laura McQuarrie — September 12, 2014 — Marketing
References: dqblizzardbattle & adweek
For the first time ever, Dairy Queen is featuring two Blizzards of the month and the two flavors will be engaged in a food battle for supremacy. Beyond just pitting the Apple Pie Blizzard Treat against the Pumpkin Pie Blizzard Treat, Dairy Queen has gone as far as to involve the US states that are best known for each food. Representing apples is Wenatchee, Washington, which has been called the "apple capital of the world," which is going up against Caro, Michigan for pumpkins.

Fans will be able to vote for their favorite flavor online and the winning hometown will be crowned the "Blizzard Treat Capital of the World." Out of these two fall flavors, as of now, the Pumpkin Pie Blizzard Treat is in the lead by just over 60%.
2.9
Score
Popularity
Activity
Freshness