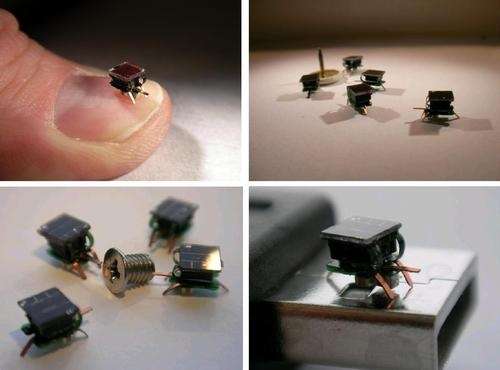 Robyn Currie — August 29, 2009 — Art & Design
References: physorg & gizmodo
Teams of scientists throughout Europe are in the process of creating what can best be described as tiny flea-sized robots. These robots are being designed to do almost anything, from cleaning to surveillance and medical work.

When the researchers say they are making flea-sized robots, they mean it: “their length, width, and height each measuring less than 4 mm. The robots are powered by a solar cell on top, and move by three vibrating legs. A fourth vibrating leg is used as a touch sensor.”

Creating one robot is very simple, the main goal is to eventually mass produce the robots with the ability to communicate with one another while fulfilling various tasks; at which point the researchers will scream “Fly my pretties!” as the robots go out to do their bidding.
4.2
Score
Popularity
Activity
Freshness