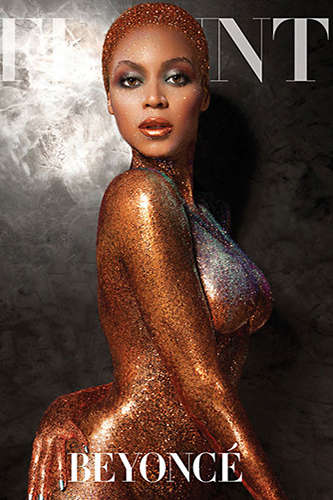 Meghan Young — July 11, 2013 — Naughty
References: flaunt & refinery29
Share on Facebook Share on Twitter Share on LinkedIn Share on Pinterest
The Flaunt Magazine July 2013 photoshoot is as fierce as it gets. Beyonce appears to channels Ru Paul in the editorial, from being completely covered in fine glitter to rocking a short paint-covered coif. Surprisingly, the images were shot way back in 2011, but they have only made it to public view now. At least this gold mine was shown at all.

Shot by photographer Tony Duran in studio, the Flaunt Magazine July 2013 editorial is titled, 'Under the Gilded Banner.' Utterly theatrical, there are points when the naked songstress doesn't even look like herself. Nevertheless, the accompanying article is undeniable proof that it is. In it she talks about everything from her favorite place to kiss to empowering the youth and how fabulous Tyra Sanches.
3.5
Score
Popularity
Activity
Freshness
Get Trend Hunter Dashboard