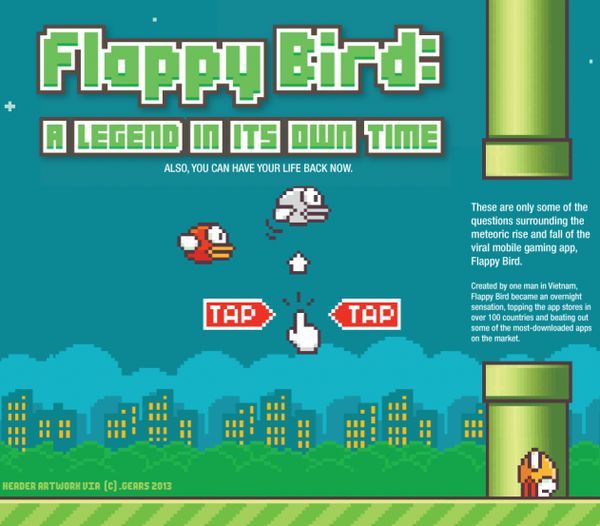 This Flappy Bird Graphic Charts Out the Game's Rise and Fall

Laura McQuarrie — March 6, 2014 — Tech
References: startapp & dailyinfographic
Share on Facebook Share on Twitter Share on LinkedIn Share on Pinterest
This Flappy Bird graphic from Start App charts the rise and fall of the extremely addictive and wildly popular app. It seems that Flappy Bird had a relatively short lifespan, but as this infographic notes, the game was first launched on iOS back in the spring of last year. It took some time to build up in popularity in Russia and Australia before it really started to pick up in January 2014. From there, the game became the top free app in 53 countries worldwide.

Despite being so incredibly popular, the app was removed from Google Play and the Apple iTunes App Store. However, there are still many developers who are looking to replicate the success of the game by riding on its coattails. Among some of these is a bunch of hilarious spoofs, which are just as difficult, but provide entertaining twists on the original.