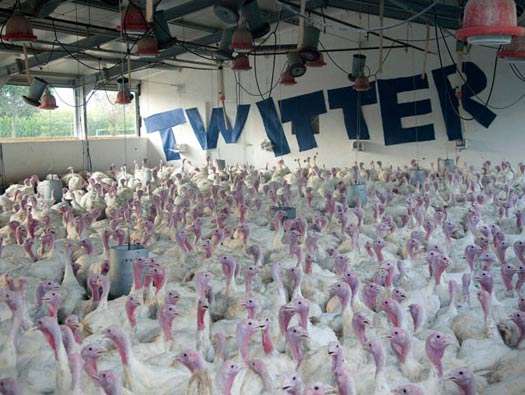 Kamal Musharbash — September 23, 2010 — Social Good
References: fecalface & mocoloco
Filippo Minelli knows that innumerable amounts of the world's population is connected by a social media outlet -- be it Twitter or Facebook or the many others. The interconnectivity between friends, families, major corporations and the marketplace all look to social media for the best networking possibilities. However, in order to play on its effects, Filippo Minelli had created his perceptive art entitled 'Contradictions.'

Both major social media networks (Twitter and Facebook) are portrayed in the most unusual places. The juxtaposition amidst the social networks and the rustic surroundings question its overall effect on society and fosters questions on branding and luxury. Filippo Minelli shows the heightened unlikeliness of social connectivity in rural places and provocatively portrays his artistic views.
5.2
Score
Popularity
Activity
Freshness

Social Network Currencies
Empire Avenue Tells You What You're Worth
play_circle_filled