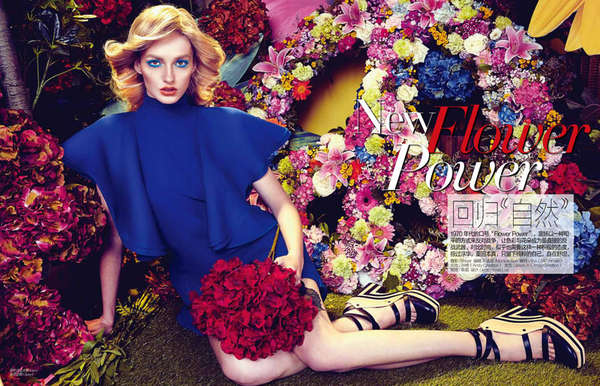 Meghan Young — June 21, 2013 — Fashion
References: femina.cn & fashiongonerogue
If there ever was a time for tons of vibrant hues, it would be the summer season, which the Femina Magazine 'New Flower Power' editorial has women covered for. Moving away from the pastels of spring, the photoshoot impresses upon readers that richer jewel-tones are what the doctor ordered.

Rife with silhouettes straight from the seventies, the bright ensembles featured throughout the Femina Magazine 'New Flower Power' editorial is playful on a few levels. It stars model Ana-Maria Georgescu, who is set to appear in the latest issue of the Chinese publication. She was shot by enigmatic Chinese photographer Shxpir and styled by Difei Sun.