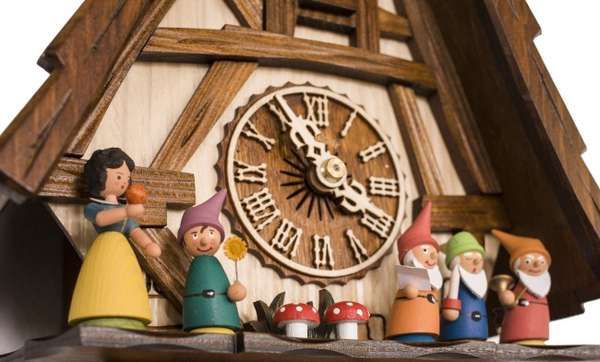 — July 1, 2013 — Art & Design
References: hansandgreta & designyoutrust
Share on Facebook Share on Twitter Share on LinkedIn Share on Pinterest
The Snow White and the Seven Dwarfs cuckoo clock is one of several romantic and nostalgic fairy tale clocks that has popped up in the home decor market. Based on the Disney film of the same name, this clock is structured to look like the little cottage in which Snow White lived with her seven small friends. Outside of the cottage stands a miniature version of Snow White, in her iconic blue and yellow dress. Beside her stand the seven dwarfs, from Sleepy to Sneezy.

The clock is fully functional, and creates a cuckoo noise on the hour. There is a lever that allows this sound to be turned on and off, if the user would rather use the clock as a decoration.

This beautiful, hand-carved clock demonstrates once again how deeply Disney characters have permeated pop culture in North America. It's been over 80 years since Snow White premiered in theaters, but it still manages to remain an iconic symbol of early animation and romantic fairy tales.
2.2
Score
Popularity
Activity
Freshness
Get Better and Faster