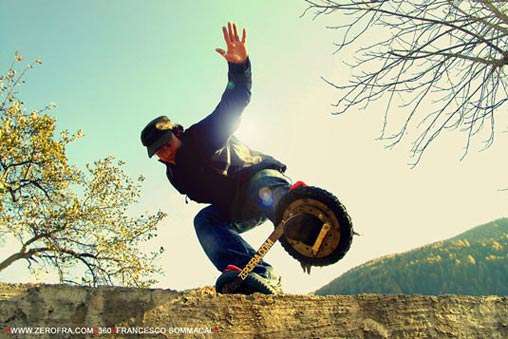 Elsa Blaine — June 6, 2008 — Lifestyle
References: zerofra & ispo-sportsdesign
Share on Facebook Share on Twitter Share on LinkedIn Share on Pinterest
The 360 from Zerofra Design is best described as crazy fun on two wheels. Young Italian designer Francesco Sommacal won the 2007 Volvo Sportdesign Concept award for the 360. The board combines surfing, snowboarding and skateboarding into one extreme piece of sports equipment. To ride the 360, your feet are inserted in the open area of the wheels, the distance between which can be adjusted to suit the rider, and you're ready to roll.

Jury member Gerrit Terstiege says, it's' an amazing concept, which deserves a great success on the market.â€

Check out the amazing videos Francesco put together to show what an experienced rider can do on his site.

Take a look at some more boarding innovations: