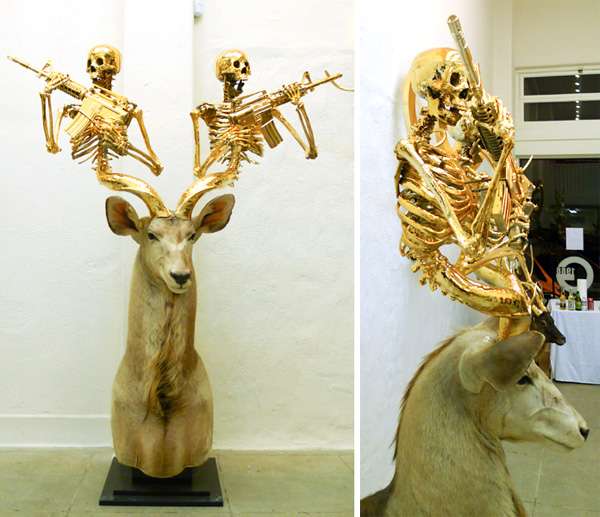 The 'Evolution Will Be Fabulous' Exhibit Features Decked Out Taxidermy

Meghan Young — October 21, 2011 — Unique
References: petergronquist & neatorama
Share on Facebook Share on Twitter Share on LinkedIn Share on Pinterest
Taxidermy-inspired art is nothing new, what is new is 'The Evolution Will Be Fabulous' exhibit. Not only because it was just recently launched, but because of the pieces showcased in it. Comprised of a slew of stuffed trophy animals with the antlers of each replaced with eccentric, golden ones, this exhibit is intense. If these creatures were alive, they would most certainly be drug lords of animal kingdom, that's for sure.

Created by Peter Gronquist, 'The Evolution Will Be Fabulous' exhibit is being held at the Gallery in 1988 in Los Angeles. This modern interpretation of the popular taxidermy artform will surely inspire other likeminded artists to step up their game. These fearsome golden antlers are unlike anything out there right now.
4.4
Score
Popularity
Activity
Freshness
Attend Future Festival Virtual