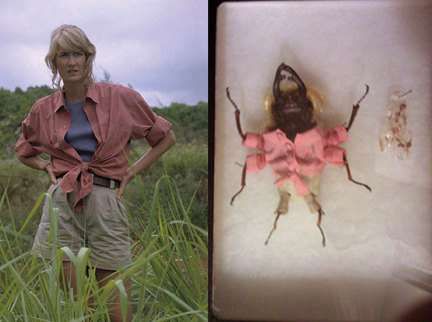 Meghan Young — December 15, 2011 — Unique
References: etsy & neatorama
Share on Facebook Share on Twitter Share on LinkedIn Share on Pinterest
Erin Pearce has created perhaps the most bizarre craft ever: Beetles dressed up as Jurassic Park characters. Regardless of what possessed her to fashion these truly unique items, they will definitely garner a lot of attention. Especially with rumors flying about Steven Spielberg directing a fourth installment of the Jurassic Park franchise.

Based in Huntington Beach, United States, Erin Pearce is a painter, mild graphic designer, embroiderer and seamstress. Of course, none of these professions prepare anyone for Erin Pearce's peculiar beetle creations. She doesn't even seem to understand them herself by the looks of her Etsy store name, 'What What the Hell Is This?'