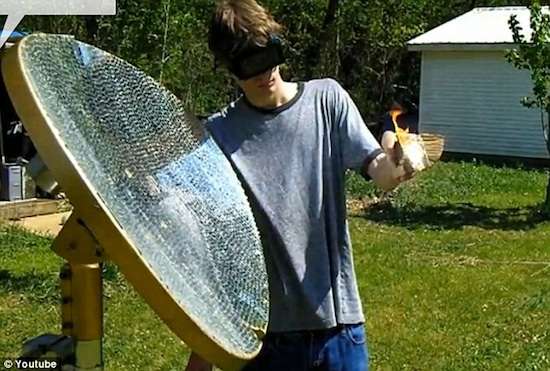 19-Year-Old Eric Jacqmain is Shaping Up to be the World's Dr. Evil

Meghan Young — February 1, 2011 — Art & Design
References: dailymail & dvice
Share on Facebook Share on Twitter Share on LinkedIn Share on Pinterest
By the look of his homemade death ray, I think I can safely assume that 19-year-old Eric Jacqmain probably won every science fair he's ever participated in. By building a "death ray" "intensity of 5,000 shining suns," according to the Daily Mail, he's putting himself on the map as Dr. Evil.

Unfortunately, Eric Jacqmain's R5800 Solar Death Ray was destroyed by its own power in a shed fire. However, this hasn't deterred its creator. In fact, Eric Jacqmain plans on building another one that will boast 32,000 mirrors rather than its predecessor's measly 5,800.
6.3
Score
Popularity
Activity
Freshness
Attend Future Festival

Hyperspeed Weaponry
The M32 Grenade Launcher is Silent and Deadly