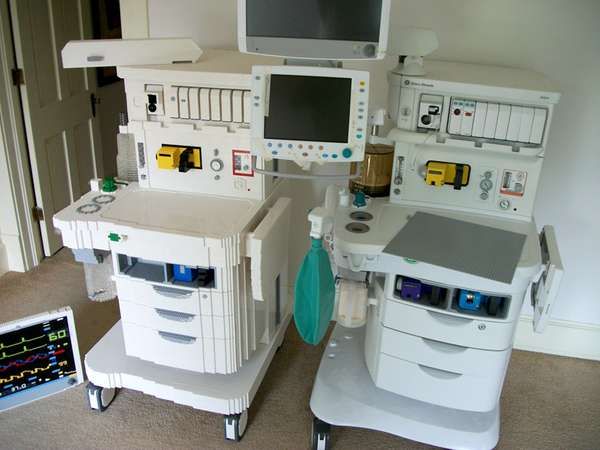 Josh Triantafilou — March 14, 2012 — Art & Design
References: ericharshbarger.org & designboom
Share on Facebook Share on Twitter Share on LinkedIn Share on Pinterest
Commissioned by GE healthcare, professional LEGO builder Eric Harshbarger recently constructed a full-scale replica of an anesthesia machine in his favorite medium. He began his task with an incredible eye for detail, an actual anesthesia machine for reference and 30,000 LEGO bricks. From there he created a base and gradually worked his way up to the full-scale model.

Eric Harshbarger's work perfectly captures all the contours and nick-knacks of the actual machine -- from something as banal as wheels to as intricate as life-sign monitoring screens, Eric Harshbarger has it covered. This feat is all the more impressive when one considers the planning and thought that must go into coordinating 30,000 tiny pieces of LEGO.

Eric Harshbarger's creation was unveiled to the American Society of Anesthesiologists at their annual meeting. Hopefully the good doctors don't confuse it with the real deal.