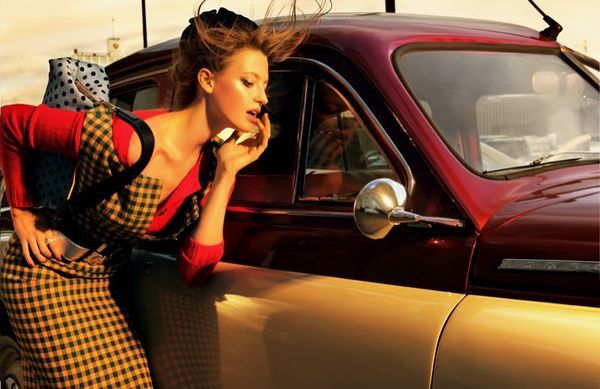 Meghan Young — November 26, 2013 — Fashion
References: elle.ru & fashiongonerogue
Share on Facebook Share on Twitter Share on LinkedIn Share on Pinterest
It is only appropriate that the ELLE Russia 'Red Moscow' editorial would be the one to bring back a semblance of USSR (Union of Soviet Socialist Republics) fashion. Focusing mostly on the retro styles of the '40s, '50s and '60s, the looks are as feminine as American housewife wardrobes in that era but with a stricter quality. Of course, the modern photoshoot sensualizes the looks as well.

The ELLE Russia 'Red Moscow' editorial, which stars model Anastasia Kuznetsova, was shot by photographer Nikolay Birkukov. Set to appear in the December 2013 issue of the magazine, it exclusively showcases pieces from Prada. Put together by stylist Renata Kharkova, the outfits are perfect for the winter season. The fashion forward outerwear and ladylike accessories are perfected with makeup by Andrey Shilkov and hair by Katarina Kochik.
6
Score
Popularity
Activity
Freshness
View Innovation Webinars