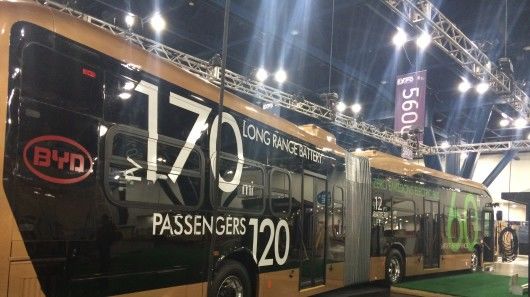 The Lancaster eBus is the World's Largest Battery Electric Vehicle

Rahul Kalvapalle — October 21, 2014 — Autos
References: byd & gizmag
The Lancaster eBus is a massive articulated electric bus that is claimed by its developer BYD Motors to be the world's largest battery electric vehicle. It was introduced to the world at the American Public Transporation Association Expo in Houston. The bus is named after the city of Lancaster in California, which is where it was designed and built over a period of two years.

The 18.2-meter bus looks like any other accordion bus, but its appearance belies the highly advanced electric drive technology that it contains. It is equipped with in-wheel motors that can handle gradients of up to 21%, making it perfect for hilly urban areas. They provide a range of over 288 km with a load of 120 passengers.

This electric bus' battery can be recharged 10,000 times while still retaining a 70% charge, giving it an impressive 25-year lifespan.
4.2
Score
Popularity
Activity
Freshness