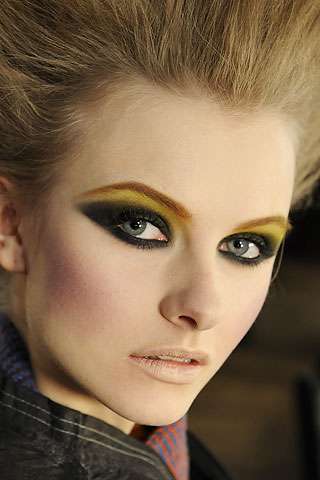 sara Harari — April 3, 2009 — Fashion
References: style & whowhatwear
Share on Facebook Share on Twitter Share on LinkedIn Share on Pinterest
The 80’s are still, of course, a favorite of the moment and are now dominating more than the clothes coming down the runways. Many shows featured models with edgy, smoky and futuristic punk eye makeup that often featured wing-like extensions of color.

The marquee example of this look had to be Marc Jacobs at his Fall 2009 show, a look created by Francisco Nars which was a very high-drama version of the 80’s eye. Other variations on this makeup included the look seen at Valentino, which was created by Pat McGrath.

Off the runway, a matte dark gray shadow concentrated on the lids that extends just beyond the outer corners will do the trick, leaving the brow bones bare. Fashionistas such as Kate Moss have been spotted rocking this look. Moss attended a Fendi party during Paris Fashion Week with a neutral eye shadow with a hint of sparkle.
6.8
Score
Popularity
Activity
Freshness
Attend Future Festival