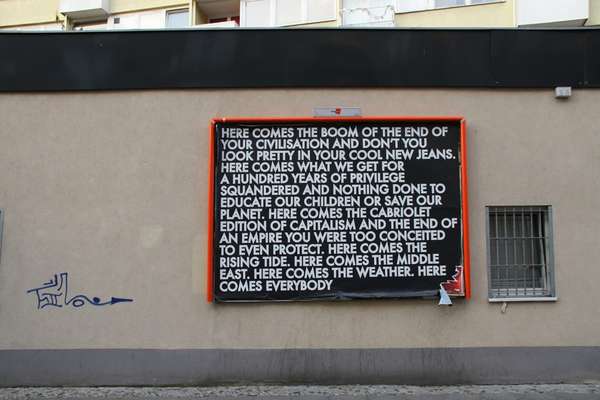 Trenton Millar — July 14, 2012 — Art & Design
References: neueberlinerraeume.de & coolhunting
This summer, Berliners are being challenged by artist Robert Montgomery to take a moment to think about the social reality of our time in a city-wide exhibit entitled 'Echoes of Voices in High Towers.' In the text-based poetic exhibition, Montgomery plastered thought-provoking artwork across Berlin, right next to billboard advertisements.

Robert Montgomery's work is honest and direct. He challenges viewers to think about topics ranging from world politics to hipster fashion. One billboard reads, "The hipster: an aesthetics of nihilist self-regard disguised as nihilist disregard." The poems are reminiscent of lectures from parents -- they inspire people to fulfill potential while making one confront the mistakes of the past.

Echoes of Voices in High Towers runs till October 2012, and consists of 10 billboards around Berlin.
2.2
Score
Popularity
Activity
Freshness