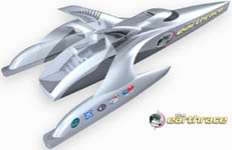 Trend Spotter — March 1, 2006 — Autos
References: earthrace.net & gizmodo
Earthrace is a new concept boat that is aiming to break the circumnavigation world record. The plan is to quickly circle the globe using a powerboat that uses only renewable fuels!

"The program includes the 24,000 nautical-mile race, which the team plans to accomplish in 65 days (the current record is 75), and an accompanying 18-month tour at 60 ports around the world. They just put the boat in the water last week, in Auckland, New Zealand. The specially-designed trimaran will run primarily on 100% biodiesel at a top speed of 45 knots/hour; the skipper even had lyposuction (?!?) so they could break down his fat and use it for fuel. These guys are serious:" (Gizmodo)