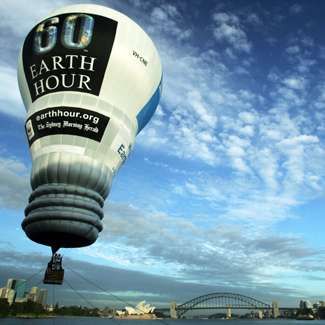 Anyone into the global campaign is curious to know the results. How many people participated? Will it make a difference if everyone shuts out their lights for one hour? I did a little research to give you the scoop. Hopefully it inspires you to do the same tonight, at 8 p.m. in your time zone.

So, how did it go? Well, as planned, all the lights on the major landmarks, including the Sydney Opera House and the harbour bridge, were flicked off. Although they had to keep some dim lights on for security reasons, there was a total black out down under.

"Elsewhere in Australia, Melbourne icons including Flinders Street Station, Federation Square, Eureka Towers Skydeck and the Rialto Towers were blacked out," the Age says. The National Gallery of Australia is also participating.

"I'm putting my neck on the line but my hope is that we top 100 million people," said Earth Hour Australia chief executive Greg Bourne.

"There's 370 cities and municipalities taking part that we know about, and many others as well, so we only need 50 cities of two million people and we'll do it.

"When Canada goes ... tomorrow our time they are estimating some 70 per cent of Canadians will be involved."

After the last lights are shut off in Vancouver tonight, we'll have a good estimate of how many people word wide took part this year.