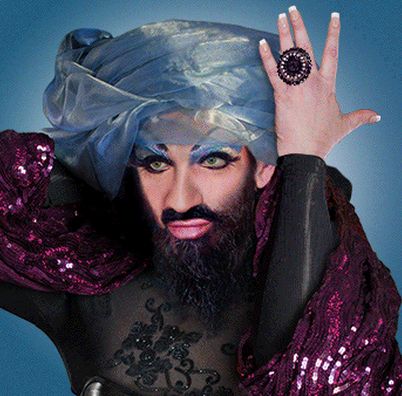 These Political Drag Queens Will Keep You Laughing

Jennifer Paul — March 2, 2014 — Pop Culture
References: sainthoax & buzzfeed
Share on Facebook Share on Twitter Share on LinkedIn Share on Pinterest
Artist Saint Hoax created a photo series called ‘War Drags You Out’ in order to take the world’s most controversial leaders, past or present, and transform them into hilarious drag queens. You will be surprised by the transformation and who they choose to transform.

Hoax says that, “A rush of images containing Hitler’s mustache, Bin laden’s headgear, Obama’s campaigns, Saddam’s crossed through my mind.” He believes that just like drag queens, political leaders are meant to entertain, perform and even lip-sync public speeches from time to time.

Saint Hoax realized the best way to transform and create a recipe for a great drag queen is a fierce persona and defining outfits. Although, I feel as though a charismatic personality makes for a great entertainer.