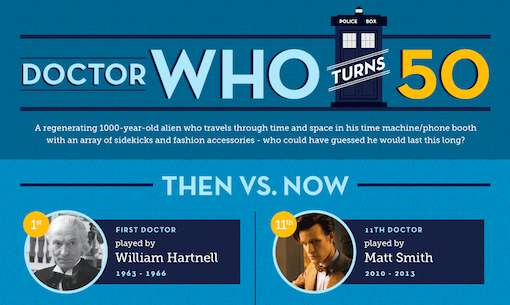 This Dr. Who Turns 50 Graph Compares the Past with Present

This infographic shares that in 1963, when the show first aired, the doctor was played by William Hartnell, and he's the oldest person to ever play the doctor. On the flip side, it's revealed that the 11th and current doctor is played by Matt Smith, and he's the youngest to ever step into the role. This chart further explores the comparisons that have occurred in the past 50 years. For example, his companion changed from Susan Foreman to Amy Pond.

While there are many changes, the infographic shares that the Daleks is still the doctor's most infamous enemy, and has a section revealing that the 4th, 10th, and 11th doctors were fan favorites.

Dr. Who is definitely a crowd favorite, as it's the longest running sci-fi show in history.
1.1
Score
Popularity
Activity
Freshness
Get Better and Faster

Nerdy Kid Karts
The Ride-In Dalek is Perfect for Dr. Who Superfans