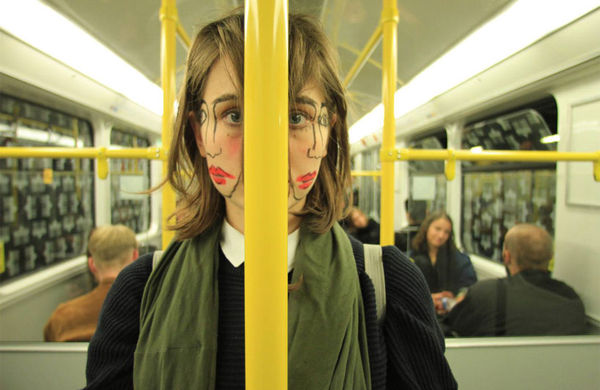 Akihiko Tse — September 25, 2013 — Unique
References: facebook & designboom
Sebastian Bieniek's surreal portraits, titled 'Doublefaced,' are an eerie and slightly disturbing depiction of a girl with faces drawn on by an eye pencil and lipstick.

In the series, a female subject's eyes are used as a marker for each of the face's face composition, giving the faces a mannequin-like persona with a hint of humanistic presence. Using her hair -- sometimes straight and at other times messy and disheveled -- the subject in 'Doublefaced' often shifts her eye sideways to match the direction the drawn-on face is looking at.

The portraits show the female subjects at different points in their day, such as taking the subway, smoking a cigarette, drinking a cup of tea in bed, putting on her lipstick and taking a shower. While the drawn-on faces remain expressionless, the subject's real eyes seem to yield a sense of suppressed dolefulness that convey Bieniek's intention of showing the two faces many people wear between their controlled private lives and manufactured public lives.