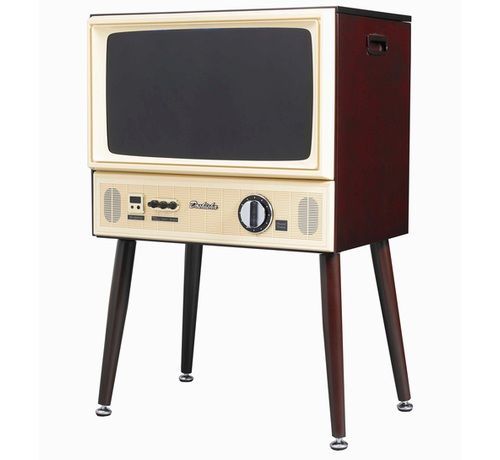 Doshisha's TV is Designed to Look Like a 1970s CRT TV

Joey Haar — November 11, 2016 — Art & Design
References: narinari & gizmodo
Share on Facebook Share on Twitter Share on LinkedIn Share on Pinterest
For those yearning to reconnect with the stylish, tactile looks of old televisions without sacrificing the technological benefits of modern monitors, Doshisha's new retro television design is perfect. The television offers the best of both worlds, with a design that hearkens to the television-as-furniture appearance of a 1970s CRT TV while displaying its images on a modern flatscreen LCD monitor.

In terms of materials, the Doshisha television's retro casing is made primarily from a varnished red wood and taupe plastic. The dials and nobs on the devices, which are metal, actually control the television's volume and channels (although it comes with a remote control as well, in case consumers aren't fully willing to commit to the 70s theme.)

The monitor itself is a 20 inch LCD flatscreen, which leaves room in the spacious back compartment for consumers to put their laptops (which can connect via HDMI inputs) or cable boxes.
5.7
Score
Popularity
Activity
Freshness
Access Advisory Services