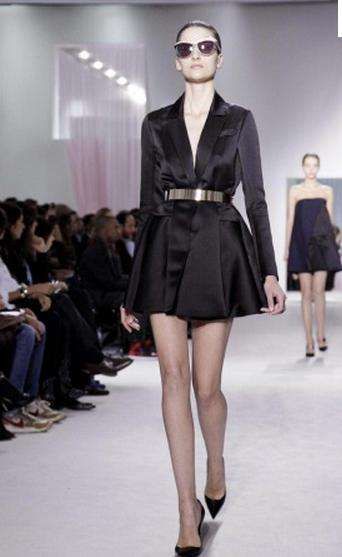 After outstanding reviews for his debut couture collection with Dior, the prospect of seeing how the Raf Simons' vision translated to ready-to-wear was one of almost palpable anticipation. The Belgian designer did not disappoint with his Dior Spring 2013 collection being one of sleek design that adhered to Dior's tasteful feminine legacy.

Simons toyed with cinched waistlines, full skirts and most importantly created a stunning wool double breasted tuxedo blazer that remained a motif throughout the collection and brought it to new heights of cohesive tailored grandeur. The decadently designed garments were not the only captivating spectacle, as this season saw abundantly distinguished front row attendees. From Carine Roitfeld, Princess Maha Chakri Sirindhorn of Thailand to Kanye West and Olivia Palermo, the show was illustrious with notable guests. There is no doubt that Raf Simons is a breath of fresh air, and the Dior Spring 2013 collection is a testament to his exemplary design vision.
3.7
Score
Popularity
Activity
Freshness
Access Advisory Services