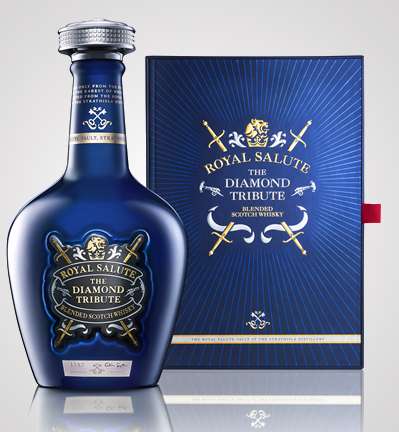 The Diamond Tribute Whisky from Royal Salute Celebrates the Queen

The Diamond Tribute was created under lock and key in the vault at Strathisla, the oldest distillery in the highlands. In fact, the bottle is so luxurious and the whiskey so perfectly blended and aged that its existence has been kept a secret until now. The whiskey's flavor is described by the company as including aromatic peaches and poached pears, finishing with a tangy liquorice aftertaste.

The whiskey itself is not the only luxurious quality of the Diamond Tribute. Its bottle is also the epitome of class, with a diamond-encrusted lid and the royal coat of arms etched onto the bottle's side.

The Diamond Tribute is a wonderful and decadent way to pay tribute to a monarch who has been a consistent presence throughout the world for 60 years. The affordability of this whiskey makes it possible for anyone to celebrate the Queen's special occasion.
1.8
Score
Popularity
Activity
Freshness
Get Better and Faster