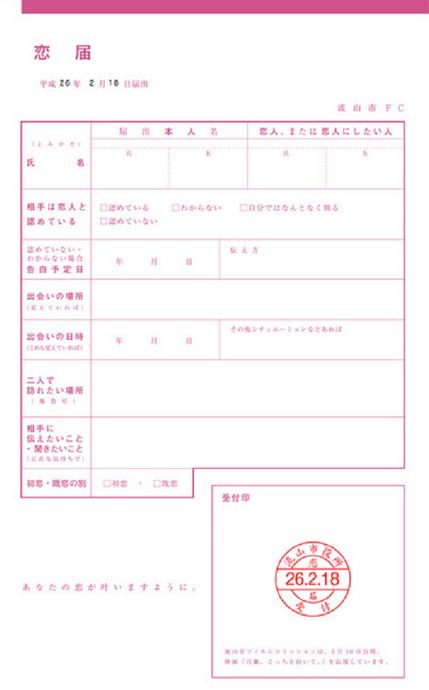 Japan's Government Lets You Declare Your Love Officially with Paperwork

Laura McQuarrie — April 9, 2014 — Lifestyle
References: momose-movie & en.rocketnews24
Saying "I love you" can be a big deal, but the town of Nagareyama in Japan is making it even more so by allowing people to submit official government "koitodoke," or love declaration forms.

The forms ask people to name themselves and the person they're declaring affection for—oddly enough, the forms are not limited to someone you're in a relationship with. Other lines ask people to specify where you and your love first encountered one another, as well as if this person is aware of these feelings and reciprocates them.

As bizarre as this all may seem, birthrate numbers are on the decline in Japan and this is especially harmful to municipalities that collect residence taxes, so this seems like an attempt to inspire romance and baby-making. People can actually fill out one of these love declaration forms in person at Nagareyama City Hall or submit a form just as easily online.
4.2
Score
Popularity
Activity
Freshness