Dead On The Catwalk

Top 40 Mobile Innovations in May 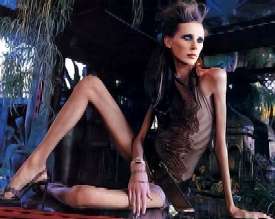 Models Fall Victim To Anorexia Trying To Slim Down

The most recent death of a runway model followed a mere six months after her own sister dropped dead during a fashion show from a heart attack induced by anorexia.

We’ve reported on this before because anorexia just isn’t cool and it isn’t right that we keep seeing this stuff.  It was great when fashion designers issued weight guidelines just before NY fashion week.  But the regulations need to be global.  Earlier this year, Trend Hunter reported on Brazil’s 4th anorexic death, all driven by the obsession with thin.

Of course, with little concern for the health of their models, a spokesman on behalf of the British Fashion Council underlined the attitude that propogates the mentality behind these needless deaths when he insisted that weight “regulation is neither desirable nor enforceable”