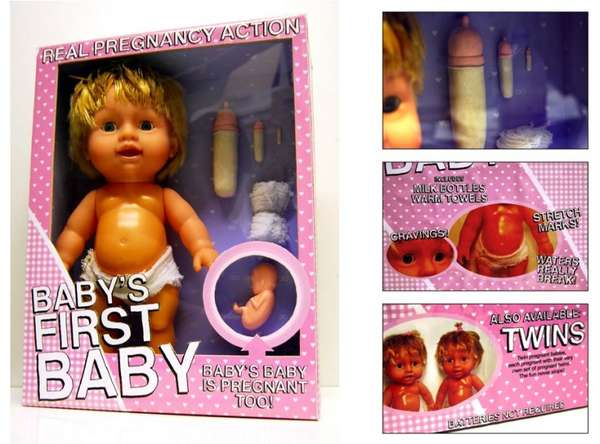 Meghan Young — October 19, 2012 — Life-Stages
References: spellingmistakescostlives & ohgizmo
Share on Facebook Share on Twitter Share on LinkedIn Share on Pinterest
There is something so terribly wrong about Darren Cullen's doll creation that it is so terribly right. Darren Cullen has created a pregnant baby doll. In fact, the baby's baby is also pregnant! It is this ludicrous possibility that will (hopefully) begin to raise red flags for people. Although packaged like a real product, it is in reality a work of art.

Darren Cullen created the doll as part of a group show called 'Moral Holiday.' Exhibited at the Northern Gallery for Contemporary Art in Sunderland, United Kingdom, many people have mistaken it as a comment on reality TV shows that exploit teen pregnancies and glamorize infant sexuality. Nevertheless, Darren Cullen sets the record straight, writing, "It's about the way these toys intrinsically train girls to have and care for children while they are still only children themselves."
2.9
Score
Popularity
Activity
Freshness
View Innovation Webinars