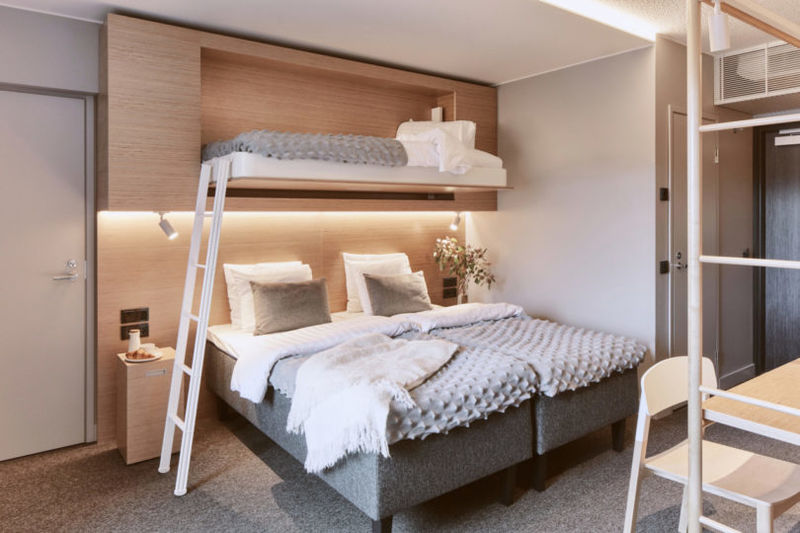 Justin Lam — April 24, 2018 — Art & Design
References: contemporist & design-milk
Share on Facebook Share on Twitter Share on LinkedIn Share on Pinterest
Airport hotels are often an uncomfortable necessity for mid-trip stops, but interior design studio Fyra is hoping to change this perception in its recent redesign of the Cumulus Resort Airport Hotel. When Fyra was tasked with redesigning the hotel the firm looked towards solution-driven design. This focus led Fyra to take particular interest in maximizing space for guests, as it would accommodate guests who will most likely not fully unpack as well as guests traveling in groups. To accomplish this, Fyra installed built-in wall beds in the Cumulus Resort Airport suites as well as open space shelving.

To further maximize the space in individual rooms Fyra decided to remove the kitchen appliances from rooms and instead equipped each floor with a small kitchen with a microwave and boiling water faucet. The entire hotel was also redesigned to be more inviting, something lacking from most airport hotels, so the space was infused with Finnish and Scandinavian design elements. Natural wood materials, a large media wall showing Finnish nature scenes and modern furniture was incorporated into the larger spaces of the Cumulus Resort Airport hotel.
4.5
Score
Popularity
Activity
Freshness
View Innovation Webinars