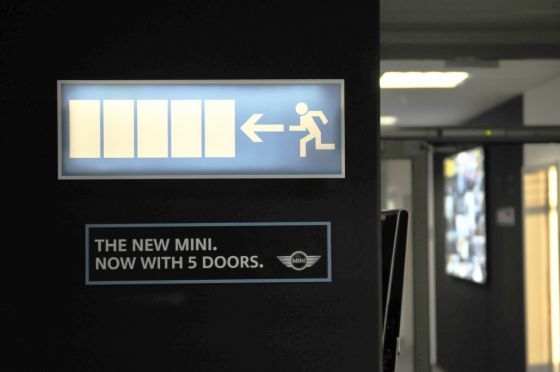 Laura McQuarrie — October 15, 2014 — Autos
References: mini & creativecriminals
Share on Facebook Share on Twitter Share on LinkedIn Share on Pinterest
This creative car advertisement promotes the launch of the new MINI hatch car subtly, but it gets its message across to those who look for it. The guerilla ads take the form of exit signs, but rather than showing just one door to indicate where to leave, the ads are set up with five doors side-by-side, along with a note to indicate one of the most impressive features of the new Mini.

In order to make the ads look almost identical to real exit signs, they were created to look translucent, and were backlit with bright LEDs in order to give them that distinctive glow. The lights ran on rechargable battery-powered packs, since the illuminated effect was such an integral part of the guerilla ads that were placed in buildings and underground lots.
1
Score
Popularity
Activity
Freshness
Attend Future Festival