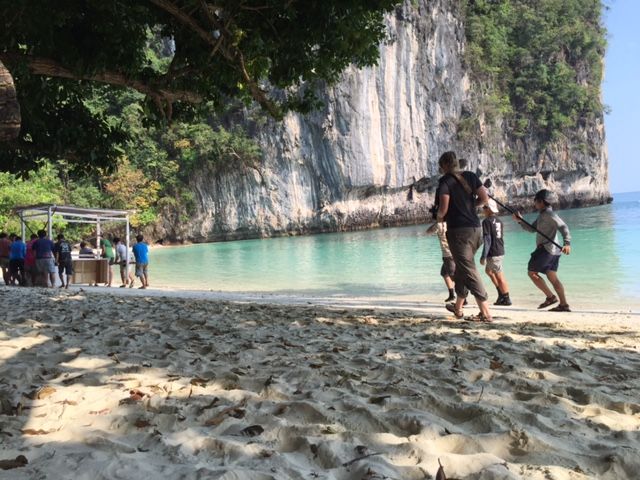 Trend Hunter Goes Behind the Scenes of #TheDreamIsland

Tana Makmanee — April 15, 2015 — Marketing
References: nl.linkedin
Share on Facebook Share on Twitter Share on LinkedIn Share on Pinterest
The Dream Island experience was chock full of adventure, unexpected surprises and of course, big reveals, and while viewers were able to get a glimpse of what the dream island was like for those 6 lucky consumers, the final film was only half the story. Putting the entire campaign together, from start to finish, took immense dedication, planning and of course, a little secrecy, making the end result even more gratifying.

Having had the amazing opportunity to fly down to Thailand to see the production team and crew at work first-hand, the scale and immense preparation that went into creating this once-in-a-lifetime experience became quite evident. I was able to chat with Dario Gargiulo, the Global Marketing Communications Manager at Heineken, to get some insight on what the team was aiming to achieve with this campaign, what it took to bring all the pieces together and the emotional reactions that came with helping the winners experience their dreams.


Q. Tell me a little bit about Heineken's strategy behind the Dream Island campaign. How did this differ from past activations?

What makes this campaign different is that we are really trying to work on promoting the Heineken tagline, which is “open your world.” With this kind of story, we’re trying to provide a deep meaning about what opening your world means for our consumers. As you can observe in the video campaign, it’s all about a message to our consumers saying “it’s up to you.” It’s an invite to people to be more open to possibilities and experiences.

The concept behind the Dream Island is based on the notion that dreams have an expiry date, and therefore you need to take care of your dreams. What we did with the campaign is that we gave a selected number of consumers the chance to experience their dreams in real life. The more you abandon your dreams the more you put your dreams on hold, unless you take care of what you really want. The final message of the campaign was just to go for it! We did this as an inspirational piece for everyone. What we’re trying to say with this piece is not that Heineken is helping you to realize your dreams, but whatever you’re dream is, or whatever you want, even if it’s different from the campaign, you can do it. It’s simply up to you.

Q. What were you hoping to achieve with this campaign?

One of the main points we wanted to achieve was authenticity. When you do this kind of activation, especially on social media, it’s important that you’re credible and create a close connection to the audience. The message you deliver needs to be credible from a brand standpoint and people need to be able to feel connected with what’s expressed in the message. I believe Heineken as a brand is close enough to people to speak to them as a friend and not in a top down sort of way.

Q. What were some of the challenges you and the team faced while putting this campaign together both before and after arriving in Thailand?

Some of the main challenges for us was to keep the secret as well as trying to create an authentic story. When you involve consumers in an activation and Heineken is apart of it, people tend to immediately suspect that something is up. Our main challenge was to give the consumers the feeling that this trip was something else, that’s why we used the hook video to try to feature this campaign as a standard promotional piece.

In the beginning, we launched the campaign as a normal promotion: tell me what your dream is and then you can win a dream vacation. Everyone was expecting to just win a dream vacation but when they arrived in Thailand, they started looking around, trying to understand what was happening and asking lots of questions. We tried to prove to them that this was just going to be a great holiday and that’s it. That’s the reason why we spent the first few days with them without any cameras around and tried to give them the feeling that yeah, this is the dream island and that they were there to just enjoy their week. And I think in the end we did a good job because if you look at the reactions that were captured on camera, the consumers were completely surprised by the reveals.

Q. How much planning and preparation did it take to pull this campaign off?

It was a very long process and took a lot of preparation. We started work on this campaign approximately one year ago. And then in June 2014, I started the conversation with local markets to understand how strong this idea was for different regions around the world. On the Dream Island, we brought people from very different areas; we had people from Indonesia, South America and Europe, and what I think is important is that everyone recognizes the message, even if they’re from a different background and culture. We didn’t know how strong this idea would be or whether it would be relevant in Asia compared to Europe, but in the end, after 4 months of preparation with the local markets, we started the pre-production approach which took another 4 months. It took a good amount of time to prepare the set, find the right space and of course, to organize and build the dreams associated with each consumer (ex. the boat, the stage and the beach bar.)

We were very lucky to find such a great team to work with, the choreographer was amazing but also the teamwork with the local Thai production company was great because it was certainly not easy, especially with coordinating and building things like the boat.

We also found a group of really amazing consumers. Everyone became friends and were really excited about sharing their dreams with each other. It was a really natural and positive atmosphere. And the winners who got the big reveal earlier on in the week helped to keep the secret and not spoil the story for the others. Big thanks to them as well.

Q. What did this campaign mean to you personally?

Personally, I think it was the most difficult project to produce because it was very complicated to organize, especially when you work with a lot of local markets. On the other hand, it was also the most amazing experience for me while working at Heineken. Honestly, when you see one of the consumers like Jessica emotional and crying while seeing her dream revealed, I was on the other side of the camera and was emotional as well! It was amazing, you never expect this during production but when something touches you, you become really proud of the work that you are doing. I will bring the experiences from the Dream Island with me in the future for sure, it’ll be one of the greatest memories of my career.

The most beautiful moment of the shoot had to be at the end of each dream reveal. For every story that was shot, I was the guy in charge of meeting the candidates after the experience to tell them what had just happened. Essentially, I was jumping out of the hidden area and saying “how was it?!” and getting their reactions and emotions live, it was amazing. It was truly great to see that everyone was astonished and very positive about what we did. It’s important to see what the viewers reaction will be but when you get the feeling in-person that those involved are experiencing something real and emotional, that’s a great satisfaction for us.

Q. What can we look forward to next for the Heineken brand?

We’re working on several campaigns at the moment, and what’s live right now is the Champions League Sponsorship, which is an activation we’re running on Twitter. In the future, we will still aim to build on the belief that to progress in life you must cross your borders and that's something you can execute in different ways. And if you look back at our past activations as well as current and future ones, this is what we’re doing with our communication approach.


After getting the chance to chat with Dario as well as the other winners, it was clear that the emotions and heartfelt connections made on Dream Island was something that everyone experienced, including those involved behind-the-scenes. The Dream Island experience was meant to not only give a few lucky consumers the trip of a lifetime, but it also proved to them, as well as those at home, that with hard work and dedication, anything can happen. While the experience may have come to a close on that sunny beach in Thailand, that doesn’t mean that you can’t continue to pursue your dreams and aspirations at home. If you don’t want to let your dreams die, then make a move. Take action. And with a little luck, you’ll get to experience what it’s like to live your dreams yourself.
7
Score
Popularity
Activity
Freshness
View Innovation Webinars