Top 25 Most Unique Dining Experiences in the World 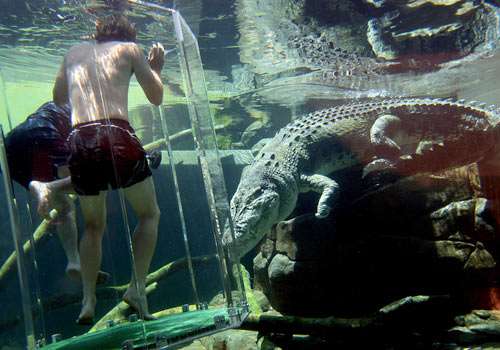 CAGE OF DEATH, Darwin
Theme park Crocosaurus Cove offers tourists the chance to come face to face with saltwater crocodiles from the safety of the "Cage of Death". Tourists spend 15 minutes inside the 2.8m high acrylic cage while Choppa the croc tryies to take a bite out of them.

COVERT OPS TRAINING, Arizona
Your mission, should you choose to accept it, is to train for a covert mission in hostile territory. At a not-so secret training base in Arizona Airport, a hand-picked group of Green Berets and contract mercenaries from the world's toughest special operations will train you in high speed evasive driving, combat pistol shooting, unarmed self-defence, explosives, espionage techniques, counter-surveillance, and booby traps.

FREE RUNNING, Paris
In the spirit of the James Bond flick Casino Royale, every last weekend of the month thrill-seekers can undertake a Free Running training session at the Dame du Lac monument in Lisses, Paris, with coaches offering tips on how to run, jump and vault over urban objects.

EVEREST SKYDIVE, Mount Everest
At a cost of $US25,000, British adventure firm High and Wild offers skydiving trips over Mount Everest. Skydivers jump out of the plane at around 8848 metres high, the same height as the summit of Everest.

SNAKE MASSAGE, Israel
Performed in Northern Israel by therapist Ada Barak, a therapeutic snake massage involves having six non-venomous serpents slip and slide down you spine to release your tensions and relieve your aching muscles.

HUMAN REMAINS, Belize
Trek through the Belize jungle, wade through rivers and explore the claustrophobic cave of Actun Tunichil Muknal to witness the skeleton of a teenage girl. The famous human remains, known as The Crystal Maiden, are believed to be those of a young Mayan princess.

KGB TORTURE, Lithuanian
A Soviet Union theme park, located in an old bunker, offers tourists the first-hand experience of a KGB interrogation.
Visitors pay to be beaten, interrogated and shouted at by tour leaders dressed as agents of the Russian secret police.

COCAINE TOURS, Colombia
These guided tours will take you along the Caribbean coast to La Ciudad Perdida – The Lost City. On the trail, the guide points out the many coca plants used to make cocaine, then it's off to a cocaine lab to learn how the drug is made.