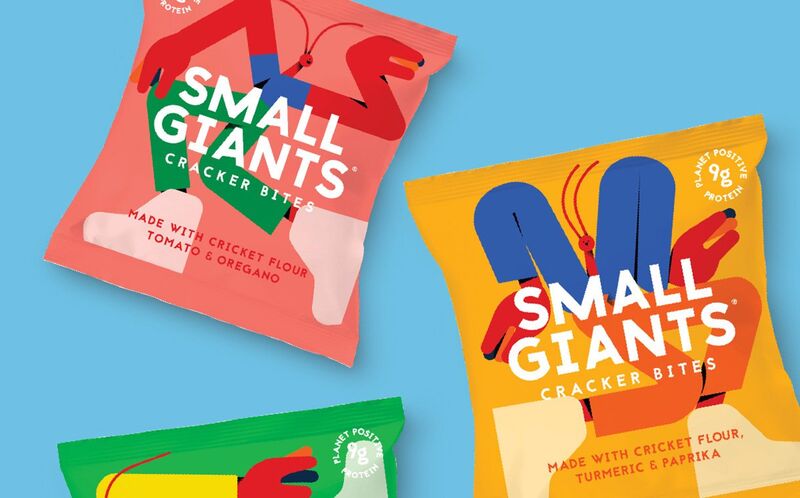 The Small Giants Cracker Bites are Made with Cricket Flour

Michael Hemsworth — October 9, 2020 — Marketing
References: eatsmallgiants & foodbev
Share on Facebook Share on Twitter Share on LinkedIn Share on Pinterest
The Small Giants Cracker Bites are a new range of snacks from the UK-based startup that are focused on delivering a tasty, satisfying experience that is crafted with unexpected ingredients. The crackers are made with 15% cricket flour that is reported to help achieve an umami flavor, while also increasing the protein level of the snack to nine grams for a 40 gram pack. The snack is also free from added sugar and has a well-balanced amount of fiber, and comes in three flavors including Tomato & Oregano, Turmeric & Smoked Paprika and Rosemary & Thyme.

Co-Founder and CMO Francesco Majno spoke on the new Small Giants Cracker Bites saying, "While people are starting to understand the reasons to include edible insects in their diet, they may be put off by the yuck-factor, but once people try our revolutionary snacks they love the taste and the taboo is broken. As attitudes towards edible insects are changing, we want to bring excitement, innovation and new consumers to the savory snacks market which has seen little change in recent years. 42% of British consumers are now willing to try eating insects. We’ve created a planet-positive insect-enriched snack that tastes great and offers a genuine alternative to those wanting to cut their consumption of animal-based foods and find an alternative source of protein.”
5.4
Score
Popularity
Activity
Freshness
View Innovation Webinars

Ancient Grain Puff Snacks
Tefftastic Puffs are Made with a Nutritious, Gluten-Free Superfood