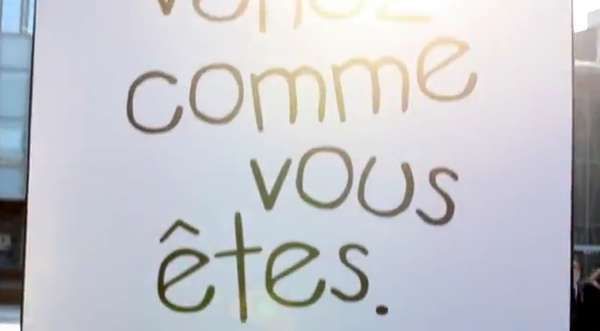 The McDonald's ‘Come As You Are' Diversity Proj

Jordy E — March 9, 2012 — Marketing
References: mcdonalds & adweek
Share on Facebook Share on Twitter Share on LinkedIn Share on Pinterest
With the help of the global ad agency BETC, McDonald’s has successfully pulled off its latest ‘Come As You Are’ publicity stunt. Situated in Paris’ La Défense quadrant, crowds gathered around a fully functional photo booth, complete with personalized printouts.

The McDonald’s Come As You Are project has strategically glossed over the company’s commonly perceived unhealthy, if not unsavory, image. By inviting general members of the public to take digitized self-portraits (which were subsequently mixed and matched, emblazoned on a giant billboard), McDonald’s looks to prove its concern for the entirety of its clientele, regardless of race, age or ethnicity.

Whether or not one is a fan of the corporation, and there are lengthy arguments on either side of the debate, those who participated in the McDonald’s Come As You Are campaign appear to be thoroughly enjoying themselves. When it comes down to it, who wouldn’t enjoy seeing their face up on a big Parisian screen, whether it's on someone else's body or not.
3.1
Score
Popularity
Activity
Freshness
Get the 2023 Trend Report FREE