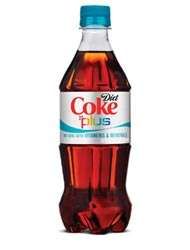 Anni — March 17, 2007 — Lifestyle
References: money.cnn & utrinski.mk
Share on Facebook Share on Twitter Share on LinkedIn Share on Pinterest
Next month, Coca Cola will officially launch Diet Coke Plus (announced in December). The drink is actually going to be similar to the current Diet Coke, but it will be fortified with vitamins and minerals, meaning that people will have even more of a reason for diet than just wanting to cut down on calories: they can do it for their health. The drink is called DIET COKE PLUS , and it will be "the first nutrient-enhanced carbonated soda to be offered by a major brand" and will not replace the current Diet Coke, which is the best-selling sugar-free soda in the world.

And also this fall Pepsi will introduce a line of enhanced carbonated drinks called "Tava." And it also will be fortified with vitamins and minerals!

I never viewed soda as "healthy". Even diet drinks have an unthinkable amount of sodium, which for women, is a disaster for her line. Some may fall for this marketing campaign - but are they fooling themselves? Is Diet Coke Plus healty soft drink?
5.2
Score
Popularity
Activity
Freshness
Get Better and Faster