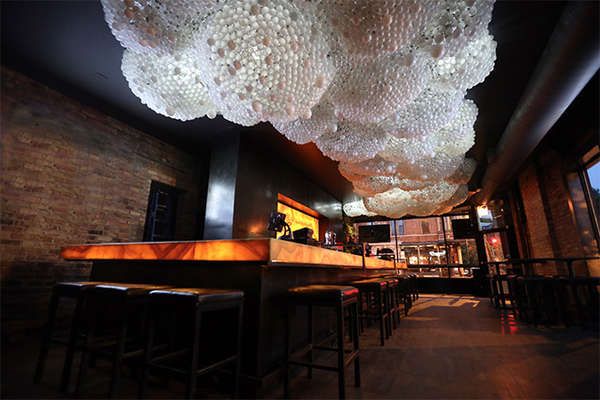 The Cloud Ceiling at Progress Bar is a Striking Permanent Fixture

Meghan Young — June 29, 2013 — Art & Design
References: incandescentcloud & thisiscolossal
Share on Facebook Share on Twitter Share on LinkedIn Share on Pinterest
The Cloud Ceiling at Progress Bar may seem vaguely familiar to some. That is because it is modeled after the cloud sculpture created by Caitlind r.c. Brown and Wayne Garrett. But no need to worry, the artists' weren't ripped off. Instead, they were commissioned to create a similar cumulous design for the Chicago lounge.

Much more extensive than their last one, the Cloud Ceiling at Progress Bar is made up of an astounding 15,000 re-appropriated incandescent light bulbs rather than a mere 6,000. Constructed using hand-bent steel, reflective mylar, electronics, motion sensors and LEDs, the sculpture is a permanent fixture in the bar, which opened up earlier this week. It offers a great attraction.
3.7
Score
Popularity
Activity
Freshness
Access Advisory Services