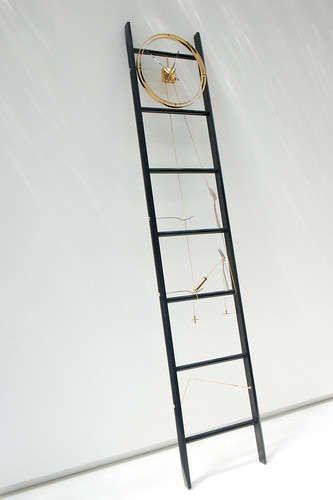 The Clock for a Filmmaker by Daniel Weil Offers Nostalgic Moments

Meghan Young — September 26, 2012 — Art & Design
References: pentagram & fastcodesign
Share on Facebook Share on Twitter Share on LinkedIn Share on Pinterest
The Clock for a Filmmaker is the last timepiece designed for the Matter of Time series. Joining Clock for an Architect, Clock for an Acrobat and Clock for a Card Player, this time-telling creation takes cues from the movie business. In particular, it is inspired by the frame-by-frame construction of 35-millimeter film.

Designed by Pentagram partner Daniel Weil, the Clock for a Filmmaker resembles a short six-foot ladder, quite like the ones found in old libraries. It is topped with a film reel-like clock face that is attached to two forks, which represent the sprockets inside a camera to feed the movement with positively and negatively charged metal beads. According to Fast Co Design, "the pitch of their tines match the pitch of the perforations of the 35-millimeter film."
1.1
Score
Popularity
Activity
Freshness
View Innovation Webinars