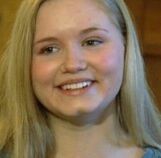 Casey Knowles, who is now 18, was a child actress and her stock footage was used in the Clinton campaign. It was supposed to be intended for cough syrup commercials, or something cute and fluffy, but instead, the video was turned into a gloomy, depressing seen meant to instill fear.

Now that Knowles is older, she's letting the world know that she does not endorse Clinton's fear tactics. Instead, she's created a new video herself, which has already generated a lot of buzz, in which she encourages viewers to vote for Obama.