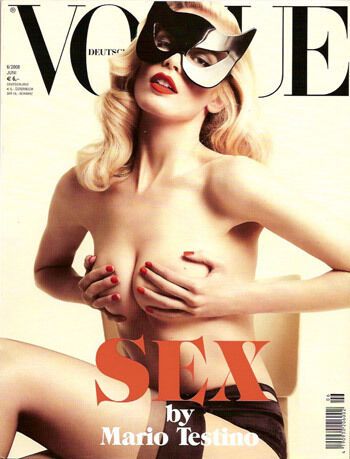 Bianca — May 15, 2008 — Naughty
References: poponut
Share on Facebook Share on Twitter Share on LinkedIn Share on Pinterest
When dealing with sexuality, most magazines do it stealthy: but not German Vogue. The only words on the cover of the June 2008 issue are â€œSEX by Mario Testinoâ€ written across an image of a nearly nude, masked Claudia Schiffer. The theme of the issue is clearly the timeless topic of sex, yet Vogue still incorporates one of the biggest fashion movements of the season, superheroes, by way of the Catwoman-esque mask.

Testino is one of my favourite photographers, and one of the most famous celebrity photographers of today. He captured the beauty of the German supermodel in the most tasteful way imaginable. It may seem odd for a fashion magazine, which gets makes its money through advertisements for clothes and accessories, to feature a model devoid of any garment but underwear and stalkings, but it's actually a clever way to entice readers.

Even female readers are drawn to this cover; not because it gets them sexually aroused, but because it showcases beauty in such a natural way.

I love how the mask ties back into the recent obsession with Superheroes....
6.5
Score
Popularity
Activity
Freshness
Jeremy Gutsche Keynote Speaker