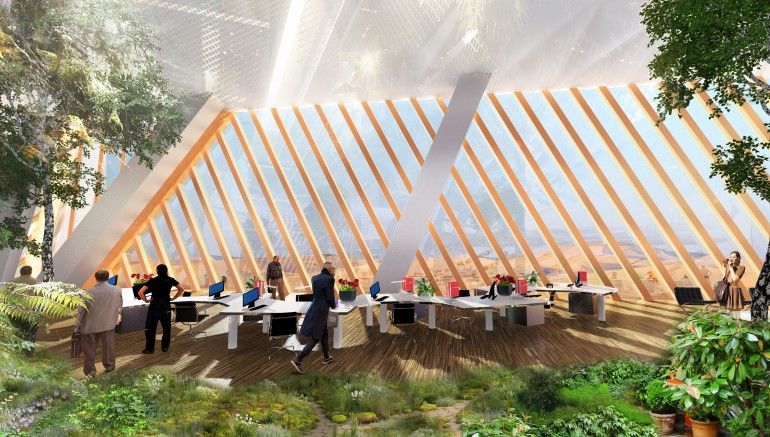 The City Sand Tower Concept is Envisioned For the Sahara Desert

Rahul Kalvapalle — April 21, 2015 — Eco
References: oxoarch & gizmag
Share on Facebook Share on Twitter Share on LinkedIn Share on Pinterest
City Sand Tower is the name of an audacious concept desert city intended for the Sahara desert and envisioned by French architecture firm OXO Architectes. This proposal aims to make sustainable high density possible in the desert, and envisions a tower run using renewable sources such as rainwater collection, solar power and geothermal energy. The concept will rise to a height of 450 meters and occupy a floorspace of 192 acres.

The sustainability technology tipped for the concept is pretty spectacular. It is claimed that 45,000 cubic meters of rainwater will be collected annually and injected deep underground, where the earth's heat would convert the water into steam. The steam would then be sent to the surface and used to power a generator that produces electricity and heats water. Rainwater would also be used to irrigate an indoor vertical garden.

The City Sand Tower project is admittedly audacious, but in an age where energy resources are depleting and the population is expanding, a bit of audacity is welcome, and this vertical desert city project certainly lives by that.
5.8
Score
Popularity
Activity
Freshness
Attend Future Festival