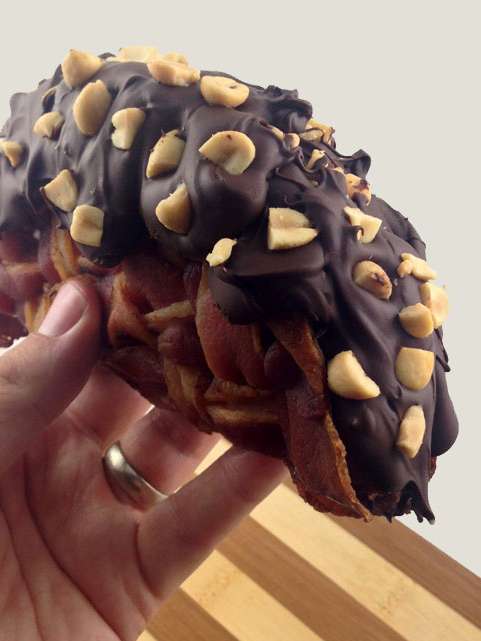 Amanda Greer — July 14, 2013 — Lifestyle
References: dudefoods & laughingsquid
The aptly named Dude Foods website has just released a recipe and DIY handbook for bacon connoisseurs interested in creating the mammoth Bacon Weave Choco Taco. The dessert can be explained in two parts. A bacon weave consists of strips of bacon weaved together to form a structure. A choco taco is a dessert normally made up of a waffle cone taco shell, filled with ice cream and topped with a chocolate shell. Instead of creating these untraditional desserts traditionally, Dude Foods combined the two, using a bacon weave shell filled with ice cream, chocolate sauce and walnuts, forming a Bacon Weave Choco Taco.

This dessert/breakfast combo is perfect for thrill-seeking foodies, combining the savory flavor of bacon with the sticky sweetness of ice cream and the bitterness of dark chocolate. The resulting confection is one of the most creative and delectable desserts of recent years.
4.6
Score
Popularity
Activity
Freshness