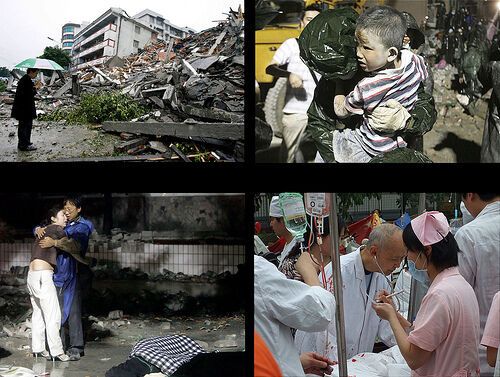 Bianca — May 15, 2008 — Pop Culture
References: flickr & bild.de
Share on Facebook Share on Twitter Share on LinkedIn Share on Pinterest
My father, a German living in Beijing, sent me a beautiful article from Bild.de, the online version of a popular German newspaper. It was a moving piece that was supplemented with touching photos like those in the gallery. It got me thinking how a natural disaster can leave over 42,000 individuals killed or missing and leave those who only a minute before were political figures, people's rights violators or Dalai-Lama haters, as nothing but loving beings.

It's as if the earthquake had to shake the world to expose the beauty that is human nature; that it needed a violent trembling for the hardened layers of the collective world ego to shed. Once uncovered, the raw nature of who we really are - the caring and the love that is the purest essence of each of us - could be revealed.

People fled to aid; they cried together. They formed rescue troupes, they saved people from danger. Children, who lost their parents, were taken under caring wings and promised they would be looked after.

The event lent the opportunity for the goodness of humanity to shine through.

There are thousands of photos to show this love, this kindness, this peace and the underlying joy that can be felt as a result. The images show people hugging, holding, comforting and helping.

Franz Josef Wagner who wrote the article, and all the photographers who captured this beauty, are helping to bring people to a space of gratitude, bringing new awareness; for the reminder that the people of China are me, that we are one people, and we are all beautiful.

This is a mementos first as China has never shown its citizens as vulnerable through photos that have such a powerful, raw impact.
2.7
Score
Popularity
Activity
Freshness
Attend Future Festival