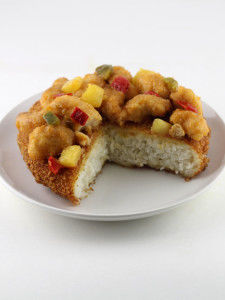 While most Italians would probably take issue with this concoction being called a pizza, the dish is also inventive in its interpretation of Chinese food. Again, most Chinese people wouldn't recognize the recipe either. The chicken pizza, therefore, has multicultural influences while still being notably North American.

The sweet and sour chicken sits on top of a thick patty of breaded and deep fried rice. The white grains were breaded in "Japanese-style panko breadcrumbs," where as the toppings consist of chicken, pineapple pieces, red and green peppers doused in sweet and sour sauce.
1.6
Score
Popularity
Activity
Freshness
Get the 2021 Trend Report FREE