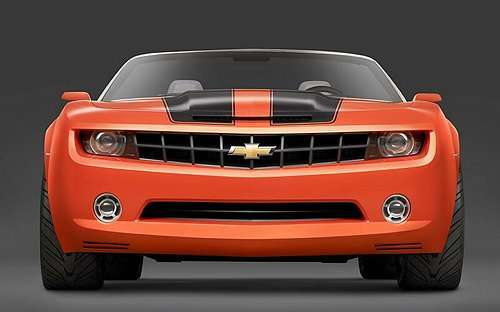 Jeremy Gutsche — January 6, 2007 — Autos
References:
Share on Facebook Share on Twitter Share on LinkedIn Share on Pinterest
Tonight I am attending the release party for the new Chevrolet Camaro Convertible, anticipated for 2009 production. The publicity embargo for the car has just been lifted, so you're among the first to see the detailed specs and some breaking photos of the car. For background, the Camaro concept was the star attraction of last year's auto show, and fans have been eagerly awaiting the rollout design.

The aggressively styled Camaro rolls on massive 21 and 22 inch wheels, just large enough to make you feel like a gangster.

Here are some details from Chrystler:
The Camaro convertible concept embodies strong heritage while appealing to a new generation of customers who seek a distinctive statement in a new car.

Chevrolet already has announced production plans for the Camaro, which will go on sale in 2009. A production convertible model will be added later that year.