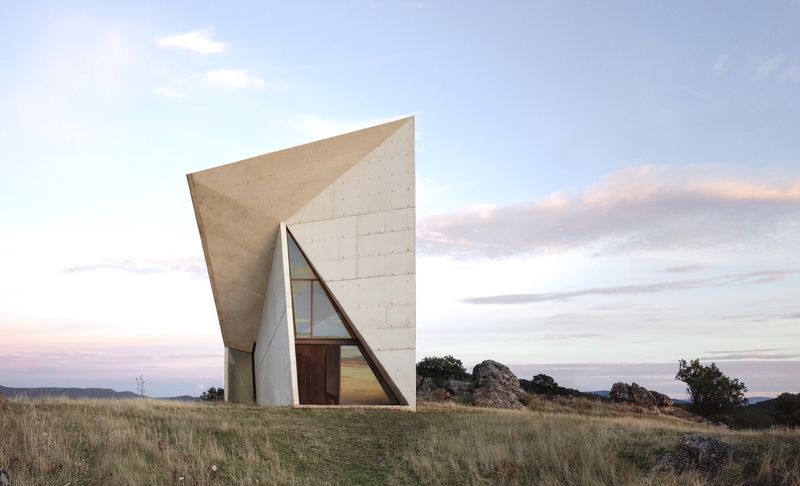 'Chapel in Valleaceron' has a Uniquely Geometrical Layout

Joey Haar — September 29, 2016 — Art & Design
References: sancho-madridejos & archdaily
Share on Facebook Share on Twitter Share on LinkedIn Share on Pinterest
For centuries, churches, mosques, and other religious buildings represented the forefront of architectural technique, but Chapel in Valleaceron is blazing a different, more artistic architectural trail. Rather than the vaulted dome of the Hagia Sophia or the flying buttresses of the Notre Dame, Chapel in Valleaceron uses a "focally tensed box-fold," according to Spanish architect Sancho Madrilejos, which creates its canted angles.

The theory behind the chapel's design comes from the idea of a cardboard box, interestingly enough. Essentially, the architect conceives of the building's shape as a box with one of its sides punched in. Though the inspiration may be strange, the resultant design is one that draws the eye toward the building's asymmetrical entrance such that visitors to the Chapel in Valleaceron instinctively know where to enter, whether they've been there before or not.
1.3
Score
Popularity
Activity
Freshness
View Innovation Webinars