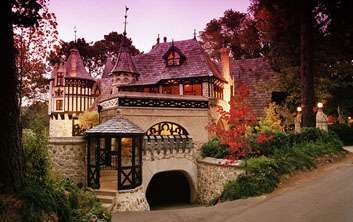 Bianca — November 18, 2007 — Art & Design
References: unusualhotelsoftheworld
Share on Facebook Share on Twitter Share on LinkedIn Share on Pinterest
Le Prince Noir in les Baux de Provence, France is a B&B resting inside the caves of a Mediterranean cliff. "This artist's house contains artworks, reflecting nearly a century of encounters and friendships," the site explains. "An exclusive self-contained lodging in one of the loveliest villages in the south of France."

It's a small, intimate setting with more character than any artist could capture. The rooms are permeated by rocks, as seen in the living room shot in the gallery.

Too romantic, isn't it?

The only thing that would deter me is the potential mustiness and guaranteed cold between the rocks. Which is why it's great there are more options...

If someone offers you a vacation fit for a princess, what do you picture? Don't for one second think it would be too far fetched to retreat to a real life castle -- you can, and Unusual Hotels of the World is just the site to help make your fairy tale dreams come true. They list five spectacular castles and palaces intended for royal retreats with a whole lot of pampering.

You don't need to have the bank account of a prince or princess either... well, at least not for all of them. One of the most intriguing is Thorngrove Manor, a castle in Adelaide, South Australia that starts at $350 a night. It looks like a cross between an fairytale castle and Snow White's cottage in the woods.

Also featured in the gallery is Gran Hotel La Florida in Barcelona, Spain. The designer hotel starts at $250/night and offers stunning views of Barcelona. The luxury hotel on Mount Tibidabo has 14 rooms. In the gallery, it's the white villa with the terracotta roof situated on a forested mountain. The city views in the gallery are taken from the resort.

Not featured on UnusualHotelsOfTheWorld, but worth noting is the Schlosshotel im Grunewald in Berlin. This looks a lot the way I would have imagined a castle to look back in the days of elegant balls... the type of place Cinderella was partying on the night she met Prince Charming. The lavishness is all in the details, thanks to Karl Lagerfeld who take care of the interior design, adding details such as gold crown moldings and antique furniture upholstered with the finest ruby red fabrics.
3.7
Score
Popularity
Activity
Freshness
Access Advisory Services