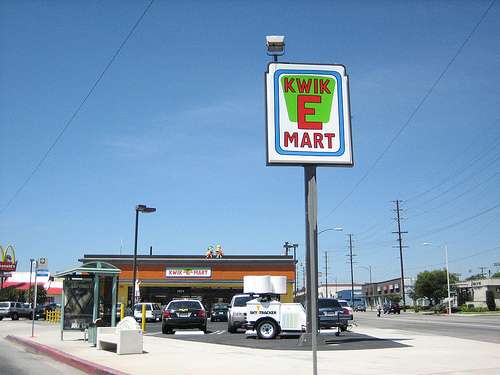 Angela Lowe — July 3, 2007 — Marketing
References: flickr & ohgizmo
Share on Facebook Share on Twitter Share on LinkedIn Share on Pinterest
As part of the overall campaign for the upcoming The Simpsons movie, FOX converted 7-11 stores across the U.S into complete replications of the Simpsons' iconic Kwik-E-Mart. Apu, Homer, Marge, Bart, Millhouse and several other characters can be seen all throughout the stores. Products like Duff beer and Krusty-O's also appeared to be for sale within the stores. This Kwik-E-mart is located in Burbank, California.

Implications - Many individuals depend on fiction as a means of relief from their own lives. From television to film to literature, consumers are constantly investing their time and money in ways to briefly escape reality. Companies and businesses that can transform such fictional settings into real things will appeal to these individuals. Consumers will be able to indulge in their fantasies on a daily basis.
3.5
Score
Popularity
Activity
Freshness
Access Advisory Services