Media Parks of the Future

Greening The Persian Golf
Next
Set of
Related
Ideas 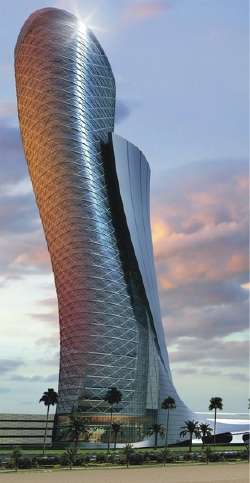 The 'Capital Gate' in Abu Dhabi

Marissa Brassfield — October 31, 2008 — World
References: building & luxist
With all of the Middle Eastern architectural opulence featured on Trend Hunter alone, it’s hard to imagine a structural category that has not already been beefed up by Abu Dhabi, Dubai or Iran. Developers Abu Dhabi National Exhibitions Company, however, have found a spare spot in the record books in which Capital Gate in Abu Dhabi will carve its niche.

Capital Gate in Abu Dhabi will be the world’s most inclined tower when it finishes construction. Consider that the Leaning Tower of Pisa, a landmark renowned for its signature slant, leans at about four degrees. Capital Gate will lean a whopping 18 degrees--an incredible undertaking when wind, gravity and seismic activity are all considered.
3.8
Score
Popularity
Activity
Freshness