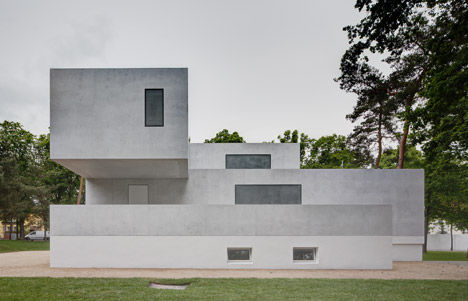 After being destroyed in a World War Two air raid, the homes were refashioned into a factory and hospital. Rather than returning the buildings to their former state, Marquez further reduced the already minimal design and recreated the exteriors in a contemporary fashion. He kept the original proportions of the structure the same.

The finished homes consist of concrete shells adorned with windows treated with an opaque wash to further accentuate the sculptural silhouette of the structure. Inside, they house an installation by Olaf Nicolai, titled 'Color of Light.' Inspired by Moholy-Nagy, Nicolai divided the interiors into rectangles and squares that mimic the artist's geometric aesthetic.
3.7
Score
Popularity
Activity
Freshness